skip to main | skip to sidebar

Right now, as I write this, my body is aching all over.
Nak turun tangga klinik pun terseksa lahaii.
And don't mention about fatigue. I've already warned my children this morning not to ask any mind-boggling questions as mom and dad are too tired to even think.

Actually-nya, we really had doubts whether we wanted to go ahead racing a few days before. The baby was warded for 2 days early last week due to high fever and tonsillitis. And naturally, because of that I didn't get enough sleep for more than 48 hours.

Being a mother fooled me into thinking that I'm immune enough over the years to not catch the bug infecting my baby. But boy, was I wrong.

We arrived at Padang Esplanade in time to swiftly put on our running bibs and wait for gun off with the rest of the crowd. Sambil tunggu tu, sempat pulak ai bersandar tepi 4X4 sapentah dan boleh pulak rasa mengantuk.

Oh lupe nak cerita. A few weeks ago, we built up 3 separate plans on how to run this race.
Iaitu:

Plan A : to get into top 20 placing (macam bagus)
Plan B: to finish with respectable timing (respectable ni sangat subjective- hoho)
Plan C: to just complete the race

On good training days, after an awesome interval workout, we thought Plan A is absolutely doable.
On so-so days, kami pikir Plan B pun ok ape.

So at about 6.50am , we we're gunned off. WW reminded me not to get sucked into the overexcited-crazy-fast-starting-pace crowd. Sebab Bukit Doraemon (a Taiping road race will not be complete kalau tak lalu bukit ni) will be up next and after that a crazy-a** incline up Taman Lakeview.

Bukit Doraemon was nothing up against crazy-a** Lakeview incline. It's a sadistic running route that only crazy runners use as the incline is not only long but steep. By this time, most runners had resolved to walking. But I thought, kalau jalan, lambat pulak nak sampai puncak. Lambat pulak nak sampai sedangkan we have a patient's appointment at 9:30 am that day.
So mau tak mau kena push it jugak la.


When we reached the finishing line, I had minor tummy cramps and my mouth tasted funny. Then I felt a bit dizzy but not before wolfing down a watermelon and having a bite at a free orange cake. I think it was orange, I'm not so sure now because my taste buds went haywire the whole entire day after that.

And like I said, because we had a previous planned appointment at our clinic, so tak boleh nak linger sangat after race.

Altogether, the race was well put together from the get go.
Did I mention the road marshals were superb? Route markers cukup and paling bijak sekali, the organizers organized the route so that most of the time runners would not have to battle with the traffic. Memang rasa selamat je masa berlari. 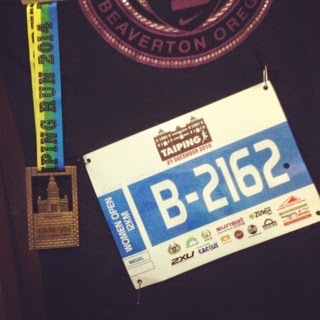 I risked falling back sick to run this race and I guess it was worth it(?).  I had fun, I had a few laughs. I called out to familiar faces and even managed to smile at a photog.
It's a long way to get back to my old running stamina but I'm confident I'll get there. Cuma, I'm not in a hurry as I was 4 years ago.

So okaylah. Itu je race report buat masa ini. I'm a bit rusty as blogging has become a once-in-a-while thing and racing has been pushed to God knows what number on my priority list.
But I will still be running and kalau ada race lagi yang seswai in the future, of courselah I will write about it here, okay.